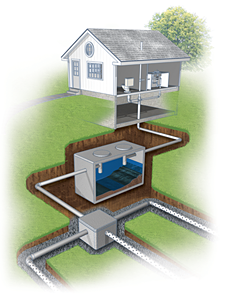 If Your Septic or Cesspool System Feels Sluggish or is Clogged

Roebic K-57 Septic and Cesspool Cleaner is a select blend of bacteria that work hard on liquefying sewage waste that may be causing the sluggishness or the clog, thereby restoring the system back to its proper working condition. At the first sign of sluggishness immediately use Roebic K-57 Septic and Cesspool Cleaner. This product may be used as often as needed. Instructions for use may be found on the bottle label. 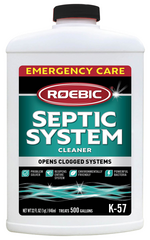 In the leachfield, these particles begin to accumulate in the tiny spaces between the crushed stone, gravel, and soil that surrounds the leachfield piping. If left untreated, this process will clog the soil. As a result, less water will be able to leach through the soil and may cause system sluggishness, surface breakouts, and clogging. Clogging may also occur as a result of a collapsed pipe, improper pipe hookups, and root intrusions into a pipeline.

Roebic K-77 Root Killer can be used as needed to kill roots that are clogging a septic system thereby restoring proper working order. Root Killer works without harming surrounding trees, ground cover, or the natural bacterial content of septic tanks or cesspools. The bottle label should be consulted for directions and usage restrictions. For additional information refer to the section entitled "Having Root Problems".